AWUOR WAS HER NAME 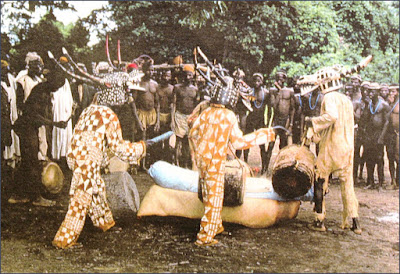 My grandmother passed on sometimes in the early nineties. I was young then. My father was a decorated “sugarcane cutter” in Muhoroni; one of the sugarcane blessed regions of Western Nyanza.
He was not only our sole bread winner, but also someone who the entire Kagan villageentitled to irrevocable eminence. As a matter of fact, he was the chairman of all funeral and harambee committees within 5 kilometer radius. Occasionally, he was elected to serve in the position of a chairperson of some women groups.
It was in mid-July, when he received the telegram. The words, vividly embedded in my blank mind, were terse and pithy. The message was shorter than the time a senior sponsor takes on these yellow yellow beauties. Or maybe, more brief than the tail of a goat. It read: ‘DANI DEAD, COME.’ “DANI” is a mononym that grandmothers are commonly referred to in our parlance (Luo phraseology).
Later, I learnt it was written by the headmaster of Onyege Primary School; the one and only Mr. Basanga. This was after several scholars in the village and those from yonder villages of Kanyaluo, Kodera and Gongo couldn’t make the message as brief as the elders could approve.
Back then, unlike today, you could choose how much to use in sending a message. Today, with the emergence of these tariffs that change call rates more than how Diamond releases his songs, you can’t tell what’s in store for you. The telegram, to me, seemed like the message the family of Lazaro sent to Jesus. A beckoning call of duty. A loud request for Him, Jesus, to rush and restore the life of Lazaro.
‘LAZARO DEAD, COME’
***
So, on a Friday dawn, we woke up at two in the morning. Prepared and ransacked the wardrobe for the best that there was. We, the kids, wore Tokyo trousers, with some vitenge-like shirts that had laces (like shoes) around the front neck. My father wore a brown faded Savco jeans, 05 T- shirt and an oversize black leather jacket. The journey to Kagan was long. Longer and more tiresome than what the Israelites might have faced, from Misri to Canaan and back. We, thekids, stood along the corridors of Kisero minibus en route to Oyugis from Muhoroni. Too short to hold the support rail at the roof of the bus, we swung left and right, like the genetically modified hips of a socialite wannabe.

I will not talk about the face-me ‘Jakadem’ matatu we boarded from Oyugis to Onjinyo; the four-hour journey we endured squatting. Those who were lucky, sat on sacks of cabbage and omena. This was amidst insults from the owners. Mostlyblack, chubby market women.

Finally, we alighted at Onjinyo. Home away from home. The walk from Onjinyo to Onyege can be likened to the time you take to trace a missing mark from a public university. Especially, in a course that you were part of the pointed edge of a love triangle with a lecturer and the lucky lady at the other two points. Here, there were no roads ahead. Just paths in labyrinths.

There were bodaboda men though. They commonly carried luggage, pregnant women or ones who recently delivered, the elderly or the sick. If anyoneoutside the above mentioned boarded a bodaboda then he must have been a very wealthy man, like my father. If she’s a woman, soon you’ll hearrumours about her affair with the ‘pilot’.Rumours that most often turn out to be true.

My father boarded one of the bicycles and left us with the luggage. He’s a typical African man, who doesn’t pester kids. I still remember his words, as the ‘pilot’ kicked the pedal…“Mad akwongnu dala!” (May I (not) get home before you).

We had to run, a sack of chopped sugarcane on your head. A big bag of clothes, hanging from your left shoulder and a five litre jerry-can of kerosene, held in your right hand.
Onyege is not our home! It’s the nearest primary school from our home. As near as the dreams of Moses Wetangula, of becoming Kenya’s fifth president. Nearer than the long awaited second coming of Christ. As my people say, whatever begins is bound to end. Finally, we were at Onyege and at long last, we got home.
***
The homestead was full of people, livestock, and dogs. I’ve never seen such a crowd of animals and humans, together. The body of my grandmother, was laid, prostrate on a mat on the earthen floor. It was covered in a white sheet. She looked fatter than when she was in real life. I later learnt that she had begun swelling. You know how leavened dough does? Yeah, I think in heaven, she’ll be served as mandazi. That night we didn’t sleep. Stories were told, in cohorts, of her life. Others talked of seasons, animals, people and other non-funeral related matters.
***
The following morning, a Saturday, we were assigned with innumerable duties. We erected a shed that was covered in maize stalks and banana leaves. We ferried desks from Onyege primary school. Fetched gallons of water from river Awach. My father invited Aguga Nyang’ and his entertainment crew. A music disco comprising of two loud speakers, one big box speaker and a radio cassette.

The biggest eucalyptus trees were cut, the village carpenters begun making a casket. The entire homestead was a beehive of activities.People camped, ate, drunk and made merry-in the traditional ululation mode. Dogs travelled from as far as Ponge to grace the occasion with their masters.
***
It was on a Saturday night when the village was lost in the frenzy dances of the night vigil that I met Awuor…to be continued.

Hahaha…Hilarious is your mastery of traditional art! Quite a good tale; a grandmother's tale