WHO WANTS TO MISS OUT ON LIFE? 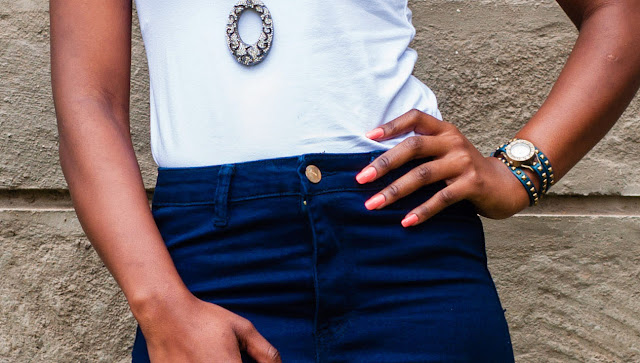 Just where is the line drawn between maturity and keeping up with trends? Or is it being savvy? Or should I call it keeping up with the changes? It’s a cold Wednesday morning; I am standing by the roadside waiting for a ‘matatu. I can hardly feel my fingers, they are numb. The young man standing beside me looks beaten by the weather…he is mumbling a song I cannot recognize, but from the tone of his voice it sounds like a sad song, a song that is meant to implore the heavens to have a little mercy on his skin, a song that is supposed to clear the mist in the air and warm the atmosphere, a song that is meant to speak to the heart of his Mhindi boss to give him the day off so that he can spend some more time under his blankets and warm the thin legs of  his newly married Tanzanian wife. I have waited for almost forty-five minutes and there is no sign of a matatu. A rosy Toyota Prado is approaching, it slows down and the driver enthusiastically hoots. He proceeds to pull over at about a hundred meters from my standing position. I briskly walk to the car,with my heart in my mouth and secretly thanking the heavens for answering the young man’s supplication. The driver hastily inquires of my desired destination.
“Town,” I answer while anticipating the most obvious statement that a man of his status subscribe to whenever there is a stranded lady involved.
“I’m driving there; do you mind if I drop you?” I did not mind at all. No, I did not have a choice because I was running late for a meeting. So, I hopped in without second thoughts. I know what you must be thinking! You are imagining how weird it is, but not after waiting for amatatu for more than thirty minutes. Meanwhile, the pleasantries continued.

“My name is Gilbert, “he said as I was reaching for the seatbelt. “And you are?”
“I am Lynn,” I responded, though feeling somewhat embarrassed for not taking the first step to initiate the introduction. Seriously, I was in his car, and the least I could have done was be chivalrous and get the conservation going, or so I think. I can’t remember the last time I heard someone introduce themselves like that; we are getting lazier by the day. You’ll probably hear someone say “Lynn”, or “I’m Lynn” just like I did. The young man who was standing beside me stayed put, he did not move an inch. His legs must have been too numb to move, or he must have decided to finish his prayer first. Gilbert’s car looked spotlessly clean and neat. His cologne made the air conditioner useless and his well-trimmed beard could make a pass for a Gillette commercial. He was clad in a white t shirt and a pair of jungle green shorts. He looked calm and one would be forgiven for imagining that he was driving away from his troubles, running away from his woes to a place where he was assured of eternal peace.
The first fifteen minutes of our encounter was like an interrogation session at one of those CID offices. Q & A if you like. Where do you live? Do you work in town? For how long have you stayed around here? Invasive accurately summarizes this session. After which, he told me that he is a petroleum engineer, a father of three, married and on paternity leave. Somehow, this was relieving; don’t ask me why. Throughout the drive, he kept making one call after another. What a recipe for disaster. I felt terrified because the highway had so much traffic andjust one mistake would have costed us a lot. When he mentioned that he was married, I didn’t say anything. I just smiled, and he asked me if I was. “Yes just married, no kids yet” I retorted, amid winning smiles and devious smirks. He made a joke about warming up for kids and we laughed about it. Meanwhile, I was tormented with thoughts of which finger on which hand bears the ring when one gets married. Anyhow, I settled on theleft hand and all the way I had to ensure it was well hidden from Gilbert’s prying eyes because there was no ring! I didn’twant him asking any more questions about my “marriage,” though I had an answer for the missing ring, I sure did!

Gilbert appeared to me like a bossy person, and at some point he called one of his subordinates to ask why the sales were going down. I kept asking myself if this call was ever necessary at all. I mean, after getting to wherever he was driving to, he would have all the time to make calls; I did not sense any urgency in what he said. Or he desperately needed to prove a point. Anyway, Kwa raha zake! The most important thing for me was to get to town in time. We talked about the weather, the financial markets, Nairobi traffic, parenthood, and somewhere in there I remember him asking me about where I grew up! I have never divulged so much information to a stranger within such a short period in my entire life. He was asking the questions like a boss and I didn’t chicken out; I just wanted a peaceful morning. So, I answered in truth and deceit. I was hoping that he doesn’t ask me about what I had had forbreakfast.

At some point, we went back to conversing about our home town, turns out Gilbert lives just a few kilometers from where I do. He was complaining about a certain hospital, which up to this point I had noidea existed, so he went through the trouble of explaining to me its exact location. If he had more time, then I am sure he would have given me the coordinates of the place.“Is it next to such and such a restaurant?” I asked and before I could complete my sentence he interrupted “Oh yes, next to Club X. That club belongs to my friend, yes, my friend owns that club” he repeated with utmost pride. At this point, he probably felt that I should get out of the car, look for a gift shop and buy him a trophy to reward him for having a friend who owns a club. When he said it the first time, it was okay, it was no big deal, but he kept repeating it, in a way to make me see just how prestigious and lavish it was.

There was a humongous blanket of disappointment on his face. He hoped that I would exclaim, scream with excitement or do something that would show how thrilled I was that he had a friend who owned a club. Well, I wasn’t. This father of three was not a young man and judging from his looks; he could be in his late forties or early fifties. I hope now you understand my stance and amusement for his style. So, Gilbert went on and on about how it is the best club around and how he spends seventy-five percent of his weekend club hopping with his friends. Good Lord! I would love to meet these friends and his family too; I project that they must be very understanding and patient. Life must be very fair to some people! It could be true what they say; that life begins at forty. Just before I alighted he asked me to take his number, he didn’t ask for mine, and only the ladies will understand that this is a good thing!

ALL STREET AND CHIC

A pool, car keys and a lesso

LESSONS FROM MY TWENTIES

WHAT KIND OF TRAVELLER ARE YOU?

WEEKEND IN THE VALLEY

That club belongs to my friend, yes, my friend owns that club” he repeated with utmost pride. At this point, he probably felt that I should get out of the car, look for a gift shop and buy him a trophy to reward him for having a friend who owns a club…..